The word ‘typecast’ must be as abhorrent to actors as the word ‘Macbeth’ is to…erm, well actors.

Having worked with a few actors on soaps in a past life, I’m aware of the frustrations some may feel when interviewed about previous roles, future roles, that many can’t see past the character they portray in living rooms, sometimes as many as six times per week. This is, of course, can be testament to their acting and three dimensional portrayal of said role.

To play a larger than life character – one whose accent and dialect is oft-quoted by even the most amateur of impressionists (yes, me) – surely the challenge is laid bare.

In last night’s performance of Rebus: Long Shadows, that challenge of diverting theatre-goers from his infamous Coronation Street incarnation,was more than met by Charles Lawson.

I hold my hands up and admit that I have never read the Rebus novels or seen the television series and so was coming at the character fresh. However, I don’t think that matters as that could only help me to come at the ‘actor Charles Lawson’ ‘fresh’.

No matter how I like to think I wouldn’t come at a production with pre-conceived ideas of how the characters were to be played, in the run up all I could think of was ‘Big Jim, Big Jim, Big Jim – I love Big Jim!’. And I think that’s quite fair enough. It is an actor’s previous role(s) which puts them on an audience’s radar and (assuming they’re an admirer of their work, of course), brings them to the next production they appear in.

All as long as you don’t attend a production/watch a programme/see a film expecting the actor and their infamous role to be one and the same thing.

However, if there had have been a danger of this last night (no matter how unconscious), it was quickly put paid to by the end of the first half.

The character John Rebus was created in the novels written by Ian Rankin, who, together with playwright Rona Munro, wrote Long Shadows especially for the stage.

Now retired, Rebus (Lawson) the Scottish, former detective is back to right the wrongs of crimes not yet solved, in particular the ‘cold case’ of the murder of 17 year old Maggie (Eleanor House), with crossovers to the more recent murder of teenager Angela (Dani Heron) – both actresses giving captivating and impassioned performances.

Nods to the past by way of the ethereal appearance of both victims on stage to represent the inner workings of Rebus’s mind, are moving, smartly executed and really quite chilling at times (apt given the time of year).

Charles Lawson gives phenomenal detective. The traits of the character and their portrayal range between troubled, angry, caring, sarcastic, jaded, passionate and funny…all perfectly complimentary to each other and each engaging and believable. It’s like he’s been playing this character all this life.

Along with the imposing yet charismatic portrayal of ‘Big Ger’ Cafferty by John Stahl and Cathy Tyson’s  Siobhan Clarke; a role performed with a clever balance of non-nonsense attitude along with a subtle but clear affection towards her former colleague, the entire ensemble work well together. 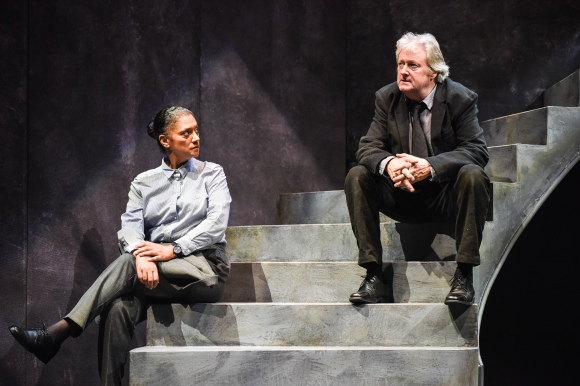 This is a great example of a whodunnit which is perfectly crafted towards the stage, both in terms of plot and set design, and assisted by the captivating performances of the actors who create an immediate engagement between the audience and the crimes to be solved, which lasts right upto to final curtain.

And just a thought – Charles Lawson, please reprise this role.