Brought up by cricket-loving parents. I can boast that I was there at the infamous Headingley Test in 1981. I was barely stringing a sentence together given my young years

(Good one, me. Who just wrote that too. About me) 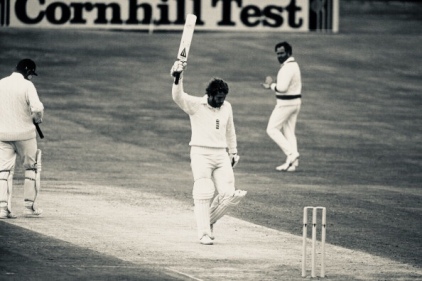 And so with that grounding, I had no choice but to have a fondness for the game. I have to admit that my love lies more in the memories that it brings for me than the stats and quality of that day’s fielding…

My Dad in the garden, listening to test match special with its permanently crackly, radio interference against the dulcet tones of RP voices, detailing that day’s play.

I might not be able to tell you all the intricacies of the game, but I’ve seen Warne bowl and I’ve seen Beefy bat. And I like Boycott’s bonkers bantz.

And for those who have no interest in the game whatsoever I’ll get to the point which involves one of the newest hotels to hit Greater Manchester;  Hilton Garden Inn, at Old Trafford Cricket Ground (aka the Emirates Stadium).

Just celebrating its 3 month birthday, I recently checked both myself and husband in to celebrate our 9 year anniversary.

We do that thing where we try and come up with some sort of genius yet tenuous link of a gift, according to what anniversary it is that year; i.e. paper, pottery, copper, ketchup, Pot Noodle, titanium and so on and so forth.

To help our quest, we open up the options to both the modern list and the traditional list (we cheat, essentially, as it can be a ball-ache).

This year I went with ‘willow’. We’d both wanted to check out the new hotel on the block at some point and so I forced a link with cricket – (willow being the bat, those who aren’t au fait with the romantic cricketing description…

the sound of leather on willow

Unfortunately our wedding anniversary inconveniently lies outside of the cricket season (or, more accurately, those games played at Old Trafford Cricket Ground this year.

No matter, this could be a recce for next summer.

Booking a room that faced the pitch (imagining dropping the ball on that one), the view was fantastic enough to please any cricket fan (again, play or no play) and impressive enough for those who don’t know their googly from their search engine). 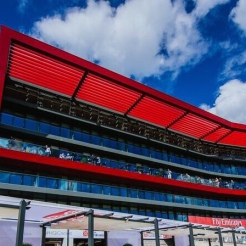 Throwing open the curtains and french doors alike (it admittedly took a number of goes – reassuringly stiff), your balcony is there waiting for you, the pitch opening up from your privileged vantage point.

On this occasion it was the perfect position to watch the sun go down over Greater Manchester. 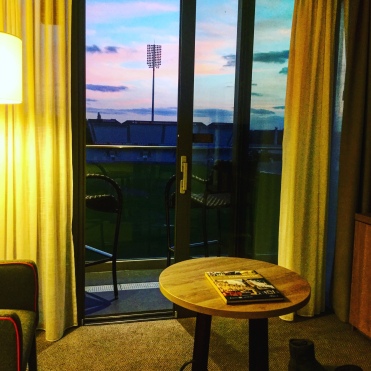 One can only imagine the thrill of sitting there watching play on a summer’s day, from your room.

With your little fridge available in the room for cold beverages at will, and a bathroom that doesn’t involve queuing with your fellow fans, you could be forgiven for feeling positively like an MCC member (basically fancy-pants cricket-goer decked out in mustard and maroon).

Away from the view, for a second, The hotel itself is modern and stylish. The rooms comfortable, and the members of staff warm and welcoming.

There was brief hilarity in the hotel bar and restaurant when my request for a margarita cocktail was misunderstood for a margherita pizza (to be fair, it’d be a cold day in hell when I rejected either), but a good night was had by all (both).

So your trip to Trafford be for cricket, football, music or just for the sunsets, I recommend the Hilton Garden Inn at the Emirates Stadium.

Well very good, since you asked. And we’ll be back next summer. 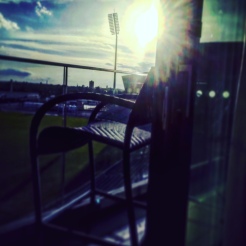 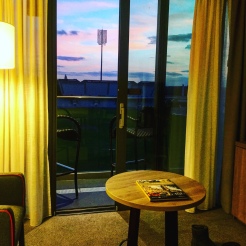 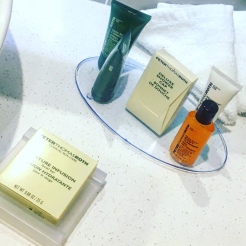