And people say she’s just a big pair of tits.

Yes, I’ve said tits in a blog post. But there’s no point being polite as the Theatre Company I had the good grace to see perform this evening are called Shit Theatre. Although for polite publications it’s written Sh!t Theatre.

I’ve already written tits and not t!ts. So I may as well write Shit and not Sh!t.

And it’s my blog so ner.

Childish comments and profanities done with, it’s time to speak of the wonder that is DollyWould at HOME theatre. 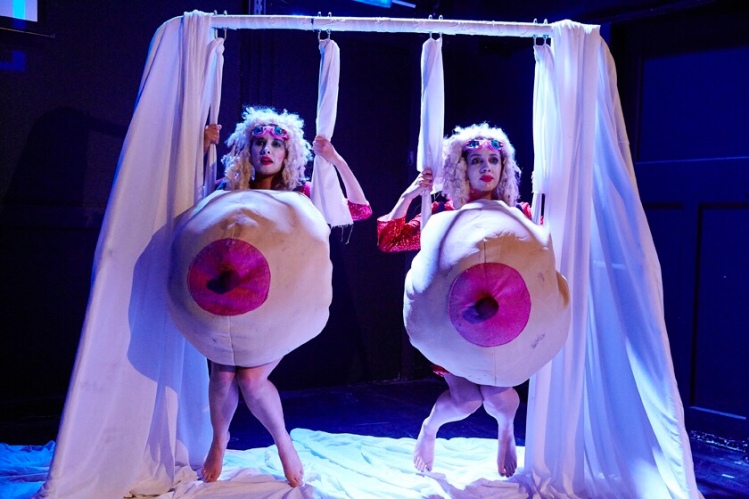 The themes of this performance are Dolly Parton, Dolly the sheep, Cloning, Originality, Sexuality and Death. With much crossover to boot.

Following their sell out run at the 2017 Edinburgh Fringe Festival, Louise Mothersole and the marvellously named Rebecca Biscuit (sorry, I’m going to be obvious and allude to it as it’s just too wonderful not to), take us on a journey both metaphorical and literal to Dolly Parton’s life and theme park (literal in that they went and showed us their holiday snaps, although I’m sold and planning my own literal, literal trip).

But then we hear of the time Dolly Parton experienced cloning of her own. She entered a Dolly Parton Drag Competition, exaggerating all her famous features including making her

Predictably she didn’t win. Her uniqueness was done better by others.

There’s much to enjoy from DollyWould. I tittered (or t!ttered) much at the device where we hear the dulcet tones of American interviewer extraordinaire Barbara Walters asking Dolly (Parton) in a 1977 interview where she wanted to be, what she wanted to achieve, Mothersole and Biscuit (is the surname thing ok? I always feel a bit rude) replicating the answers through the medium of song. 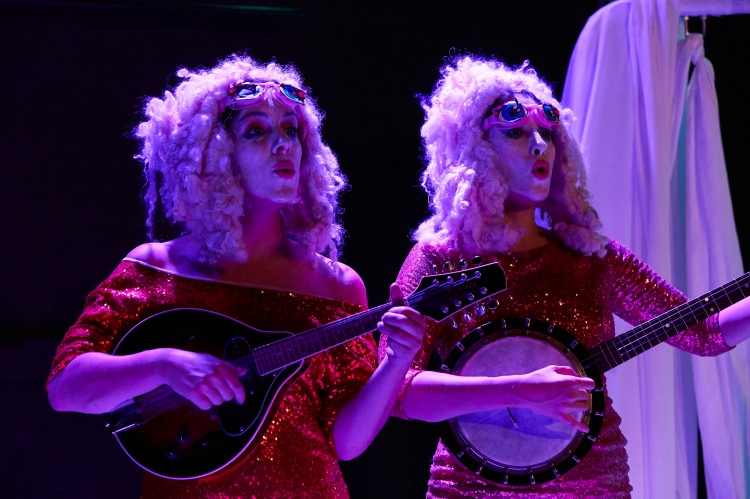 Through an audio montage which bizarrely left me feeling quite emotional (granted I’ve not had much sleep this week) we hear a long list of questions and comments from interviewers past (including our own growly nation’s sweetheart Michael Parkinson) about her appearance and weight.

We don’t hear the retorts but we don’t need to.

Dolly’s got a theme park and a gift shop.

There is also the giant mammary glands, descriptions of cadaver rotting and tattoo shop philosophy but even if you believed me, I still want you to see it for yourself.

I believe it’s sold out but there is still hope and a waiting list for cancellations.

DollyWould is at HOME until Saturday 5 May – click here for info and ticket queries.

I Would. Well I did.